There are many monasteries like the Namchi Monastery, Ralong monastery located in this town.

The world’s largest statue of the Buddhist Padmasambhava, also known as Guru Rinpoche is located on the Samdruptse hill in opposite to Namchi. It is said that the Samdruptse hill is actually a dormant volcano. According to myth, Buddhist monks go on the top of the hill and offers prayers to keep it calm.

There is also the Char Dham, the pilgrimage center of Lord Shiva. The center consists of the temples of four most important shrines in India. The town of Namchi is located at a distance of 92 kms from the state capital Gangtok and around 90 kms from Siliguri. The town is well connected to other places by jeep and buses.

There is also a rock garden located just few kms from the town of Namchi on the way to the Samdruptse hill. The rock garden provides a picturesque view of the Mt. Kanchenjunga and is an ideal recreation spot. There is also a football stadium built in honor of Baichung Bhutia. There is also the Maenam Sanctuary located in Namchi town. 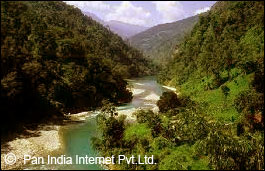 It is a renowned tea estate and has the name in production of the top qualities tea in the international market. The tea garden is spread out across on a gentle slope on the Tendong hill. The tea gardens provide a scenic view of the villages and the mountains far beyond.

Are you a Business Owner?

Add the products or services you offer